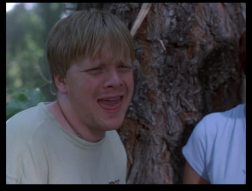 Oh, and it turns out that trying to break evil pinatas wakes them up and really, really pisses them off, turning them into unstoppable soul-eating killing machines akin to surgically transplanting Shang Tsung's brain into a T-Rex on PCP. Not to step on any intercultural toes here, but maybe the Mexican Board of Tourism should be a little more proactive about educating people re: the differences between evil invincible monster pinatas and the regular kind full of peanut butter cups and circus peanuts. Or maybe, like the creators of this movie, they don't actually know what pinatas are. Hell, after watching this we're not sure we even know any more.

Our victims? Shockingly enough, a bunch of shrieking dickbrained coeds on spring break, or as they like to call it, WHOOOOOOOOOOOOOOO! These paragons of Greek sportsmanship and camaraderie, we're told, have come to (Pinata) Survival Island to represent their college at the prestigious 4th Annual Shitfaced Dirty Underwear Rainforest Scavenger Hunt and Sexually Inappropriate Bonding Experience. The master of ceremonies for these time-honored proceedings is a very depressed Garrett Wang, more famously known as Star Trek: Voyager's loveable token Asian, Harry Kim. For the record, you know your movie's reached truly cult levels of obscurity when Harry Kim is the big get in your cast. 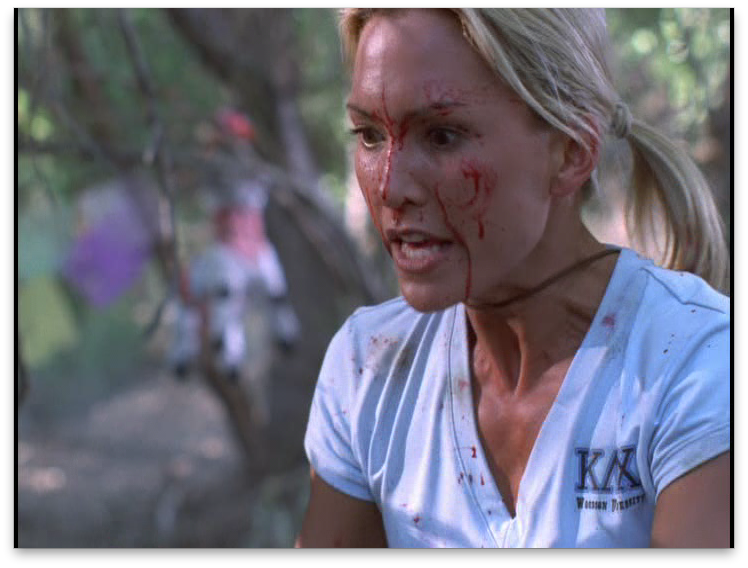 Will all great Neptune's ocean wash this blood /
Clean from my SUPER cute halter top?

We're guessing the matriculation rate at Fistpound University is pretty low since they have no problem shipping off boatloads of rambunctious frat boys to deserted islands with enough booze to kill a train full of Russian novelists. Well, that and the fact that their students seem to have the combined intelligence of a pigeon carcass rotting in the sun. Seriously, they're repeatedly outsmarted by a fucking pinata, doesn't get much stupider than that. The crowning moment of stoned-out idiocy comes when two particular mental giants happen across an ancient statue lying in the weeds, and immediately decide to smash it open because a) it's obviously a pinata and they're jonesing for some nougat and junior mints and b) nobody would ever pay money for a perfectly preserved/irreplaceable cultural artifact, like, duh?

We promised ourselves we weren't going to make the painfully obvious Yakov Smirnoff joke about the role reversal going on here so we'll just let you fill that in and deal with the resulting self-loathing on your own. Either way, thank god the Pinata Protection and Preservation Act of 2006 has brought these majestic creatures back from the brink of extinction - we still have so much to learn from them. For example, did you know that pinatas can fly? Neither did we. Or that in their natural habitat, pinatas subsist mainly on human souls and - perhaps more surprisingly - various types of indigenous nuts and berries? They have very few natural predators, the most threatening being the "busload of Mexican school children with sticks and rocks" and the more elusive "severely learning-impaired jock with a gascan."