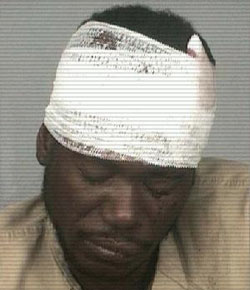 Minister Granite's Comments: Take one doped-up gun dealer and known criminal, our friend Shawn Morrison, and add a crazed single white female looking to blow up half of New Jersey, Ms. McKenna. What do you get? One heck of an evening's entertainment!

Shawn Morrison had a troubled past. He lost his dad, a Hoplite, in the Great Chicago Betrayal and his mother, a New York City Warden, was crippled by a pro-Unfolder terrorist bombing. You would think someone with a history like that would stay away from trouble, but Shawn Morrison was a slave to Stem. His expensive habit meant dealing in illegal weapons, which put him into contact with maniac killer and Unfolder-sympathizer Deborah McKenna.

Caught trying to sell the woman a number of illegal foreign weapons, Morrison surrendered and was convinced to cooperate. He pointed the finger at McKenna and for his honesty his execution was dropped down to a 25 year sentence at Holly Green. Unfortunately, Morrison died unexpectedly from blood clots the day of his arrival at the facility. 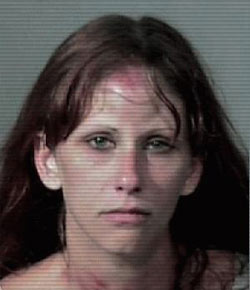 Minister Granite's Comments: If Deborah McKenna seems slightly familiar, you might recall this handsome woman from news items two years ago. She is the former wife of disgraced musician Brendan "Bones" McKenna. Convicted of grave moral threat in 2007, Brendan McKenna and his bandmates were driven over by a tank and their remains burned. Deborah McKenna was not implicated in her husband's crimes. Our bad.

The woman was obviously a bad apple. In the months following her husband's execution, Deborah McKenna went on a spree of voilence and murder, ambushing and killing two wardens in Brooklyn and a third in Newark. She also brutally stabbed to death a female Sergeant of the 82nd Hoplites. She was a fugitive for more than a year, but continued her insane plans to murder our brave men and women in uniform. Her need for more firepower brought her into contact with Shawn Morrison.

It rare that Minister Carcassi fails to obtain a confession, but Deborah McKenna's depravity knew no bounds. She chewed off her own tongue during her enhanced questioning and bit the doctors administering questioning chemicals. Despite his best efforts, Minister Carcassi turned to the executioner without a confession. McKenna was thrown to the mastiffs of the 82nd Hoplite and after many minutes of brutal struggle, McKenna was too weak to fight off the hounds and was devoured alive. A can't-miss execution.