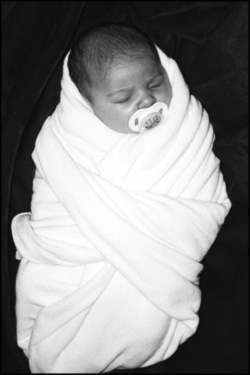 And he hold up that baby aloft, right? And in his anger he bellow, "who has left this alabaster child of Yacub upon my doorstep," but the baby just gurgle at him, and a note fall from its swaddling: "please treat Dylan good."

And Tooth be like, "first of all, we gotta get rid of that buster-ass name, cause ain't no child on my doorstep walk around with a name like Dylan." But then he soften up a little, like, "nah, man-- could be he named after Bob Dylan, a white man in color only, a man who stood by my brothers during difficult times and despite his square-ass harmonica bullshit, wrote righteous poetry demanding equality for all." And he laughed a little, you know, because the idea of a white devil considering himself equal to the original man be of supreme comicalness, but we got to respect Bob Dylan for his effort

But it was then that Tooth Tooth realized that the Chinese bitch who had been in his home only moments before had disappeared as mysteriously as she arrived, and now he was alone with this whiteling.

Tooth knew that child was his responsibility now, so he tried to do right by it. Went out to the store and bought baby food and shit-- y'all remember how baby food got real popular in the early nineties around Queens? People saw Tooth buying the shit, and they like "damn, that what we eating now." But no matter what he fed the child, it still cried, and in his heart he knew that the child was crying for the flesh of swine. Which, to Tooth, mean the child essentially be a vampire. He did his goddamn best to deprogram the whiteling, to teach it his ways, to correct the evil science that had blanched its skin and made wicked its soul, you heard?

If only he had that eagle back then, cousin. That eagle would straight-up stare the whiteness out of that baby's soul with them righteous beady eagle eyes. But being at that point in his life without the eagle most precious to his soul, although a player might argue that Tooth Tooth always had the eagle within him, but that is for another chapter, he had to teach the child on his own, which was a most arduous task, even for a poor righteous teacher like Tooth.

Teaching the whiteness out of a baby child who may or may not have tasted the forbidden garbage meats of the pig during its lifetime is an endeavor of great difficulty, even with all the power of the Supreme Alphabet. He did his best, god. He read it the most truthful poetry, he put on his deepest soul records-- he even began to play "Hurricane" by his possible namesake, but Tooth quickly got impatient with the bullshit music and just read him the words instead. You know it be with Bob Dylan. He and that baby built together for many weeks, god, but it seemed to Tooth that he was making no headway with this foolish ivory creature-- when he looked into its eyes, he did not see the gleam of enlightenment that characterizes the original man; he saw only the cowlike stare of ignorance.

And finally, Tooth threw up his hands and said "I cannot teach this child," and he brought the whiteling to his local police precinct in the hope of finding it a more suitable home among its wretched people. "Y'all can have this baby, free and clear," he told the officer on duty, "but y'all got to promise me one thing: I will not have this child eat swine. When he is of driving age, he also must not park his own car, because that is bitch shit. If these conditions are met, I will give this child the entire fortune I won in my recent legal victory."

And the officer was damn near stunned by this, since word was around in the neighborhood of how much Tooth won off Polydor Records. It was millions, god. A drop in the bucket in terms of the complete Tooth Tooth fortune, you understand, but substantial nonetheless, especially as a random act of kindness to a foundling white devil. So the cops drew up a legal document on that shit, which was an insult to Tooth because his word is his bond, but he swallowed his fury for the sake of decorum, because to fuck shit up in a police station in the presence of a baby is untoward unless the provocation is extreme. Tooth put the money in trust, and he forgot about that shit for years, god.