Can't remember quite how much that lawsuit money was. You remember that? I mean, money ain't shit to Tooth, but at the same time, that weren't no small sum.

Something like sixteen million, I think. I remember that shit from TV. 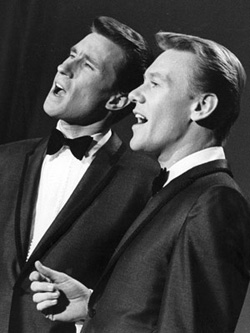 That sounds right, yeah. Goddamn near bankrupted that crooked-ass record company, but Tooth Tooth spoke for all original man when be brought that shit before a judge. I remember that like it was yesterday, how we all cheered on the streets when he won that victory, because it was against an institution that had brought tears to our community for decades. Tooth Tooth might well have been the last victim of this conspiracy, god. Imagine the pain he felt in his heart when he went to that record store and bought an album labeled "The Righteous Brothers" and took that shit home-- it boggles the mind, son, the fury that must have stirred in his soul when he heard that blonde-ass cracker voice singing "You've Lost That Lovin' Feeling" or whatever the fuck-- and that false advertising suit will goddamn well make sure that tragedy ain't never repeated. Cause now, you've seen the record, they all got the yellow sticker on that shit saying "Warning: this record album contains no actual righteous brothers."

Sixteen million in punitive damages, all in trust for this whiteling, provided it could refrain from swine and not ever park its own car, which is bitch shit. You remember, people on the corner was saying Tooth straight-up gone crazy, but fuck that. They called him crazy when he invented cashew nuts, too, but now everybody eat that shit.

Fifteen years later, and Tooth pulls the phantom up outside the Gucci store, cause he looking to buy some shoes for his niece. Got that eagle on his shoulder, ready to do business. So he take out his keys, he spy a skinny-ass white kid walking by, and he throws the keys to him, like, "park the car, white boy."

But that white boy just swat them keys out the air and keep walking. Goddamn, Tooth's eagle was finna pluck the disrespecting eyeballs straight from the boy's face, so wrathful was his contempt for the repugnance of this transgression. But Tooth just pet the bird, saying, "calm down, my righteous brother." (he ain't gloating or nothing but he definitely aware that we took that phrase back from the white man.) "Let us be deliberate in our dealings with this apparently insane honky."

And Tooth yell out, "turn around, teenage honky, and explain this affront to my righteousness," and the white boy turns to him and goes, "Much as I harbor great respect for the original man, sir, my beliefs forbid me from parking your car, for to park the car is bitch shit." And suddenly Tooth knew-- I mean, we know by now what's going on here, but keep in mind that this story was not fresh in Tooth's mind. It ain't like he just heard someone tell it. But despite the fact that he ain't think of this situation for over a decade, he knew.

So he say to his eagle, "yo, make sure this boy ain't eat no swine." And the eagle knew that this situation call for more than a cursory inspection, so he immediately fly up to the boy and land on his shoulder, then bend down forward so his beak is right in the boy face, smelling for that swine with the keenest swine-sensing nostril ever put on a righteous bird. And Tooth Tooth know the swine test came back negative, because before his eyes he clearly see that eagle not tearing the white boy's eyes out.

And Tooth says to the boy, "My son, you are the original black man." And Dylan be like, "Word," and then they both look at the eagle, and the eagle be like "word." Not out loud, you know, but in its eye. And Tooth be like "my son, I got sixteen million dollars plus a shitload of interest waiting for you, so let's get your white ass to the bank."

And Dylan be like, "shit, I'm gonna use this sixteen million dollars to build a Nation of Gods and Earths community center and teach Supreme Mathematics to my black brothers," and Tooth Tooth was like, "word."

Word is bond? A white kid say that shit?

For real, cousin. He built the shit, too. The moral of this story is that the color of your skin don't make you who you are, y'know I'm saying? Whether or not you're the original man, a true god, ain't about whether you got white skin or black skin, son. It's all about whether you eat swine and park the car like a bitch.