EXPECTATIONS: This is the cross-dressing period piece that landed Glenn Cose and co-star Janet McTeer Oscar nominations last week. Beyond that, my knowledge of this film is effectively zero. I'll say that the premise sounds intriguing and that the cast should do a fine job of keeping things interesting, but other than that I'm going into this one pretty much blind. A welcome rarity these days...

REALITY: This is a tricky film to review without getting into discussions of gender politics, which seems odd, because Albert Nobbs feels utterly terrified to even bring up those discussions itself. A lot of that has to do with the era in which the film is set, but it's also a matter of the film's characters being repressed to the point of hardly seeming alive at all. The performances convey this remarkably, so much so that they almost wind up working against the film.

Albert Nobbs (Glenn Close) is a woman who has worked in the same Dublin hotel for thirty years dressed as a man. None of her coworkers or guests ever seem to realize this, so they carry on believing Albert to be a man, albeit an extremely odd type. When a Mr. Page (Janet McTeer) arrives to paint a few of the rooms, Albert discovers that he's also a woman working as a man. Page seems perfectly content in her life, even having a loving wife to go home to. This revelation convinces Albert that she can be just as happy, and so she begins courting Helen (Mia Wasikowska), one of the hotel's young maids, much to the chagrin of the maid's new lover Joe (Aaron "Kickass" Johnson).

Glenn Close is exemplary as Nobbs. The character's public persona is that of a quiet old man showing practically no emotion, but when she's alone, we realize that what she's really doing is desperately struggling to not be noticed. On the inside, we see Albert as a woman with hopes and dreams, desperate to be a woman again, but on the outside what we see is a brick wall that resembles Peter Cushing and is precariously close to collapsing. 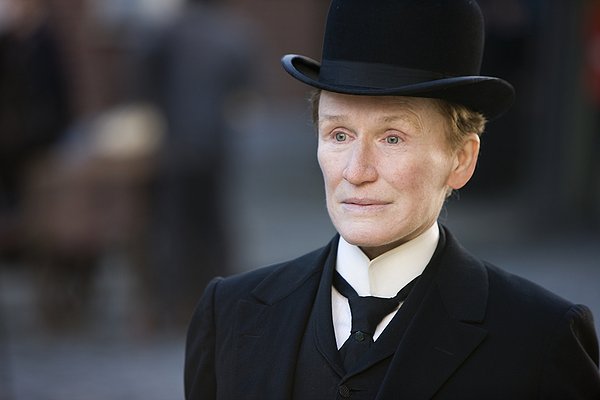 Yet I call the performance a liability, because while this is absolutely a person emotionally and physically restrained by social mores of the time and a commitment to her job, the result is a film character in whom it becomes difficult to invest. Her plight is easy enough to grasp, but it's never really clear where Nobbs stands on the matter, as Close seems almost too dedicated to playing up Nobbs' restraint. At first, it seems like she sees her disguise as simply a means to an end. She works as a man in order to save up and someday open her own shop, and insists on maintaining this facade because it's the 'decent' thing to do. Later, when Nobbs begins courting Helen, it's unclear whether she genuinely has an affection for her or if this is once again a means to an end. My point, I guess, is that we know what Nobbs' plans are, but we rarely get any glimpse at the motivations behind them.

The script is partially to blame for this distancing effect. While we're relatively involved in Nobbs' life and her emotional state (or if not involved, then at least aware of it), we're only afforded rare glimpses into the lives of the other characters. There's meant to be tension in the love triangle between Nobbs, Helen and Joe, but because we only spend a brief scene or two getting to know the latter characters, we know far too little about either of them to care. Again, we know who they are and what they want, but when it comes to learning their feelings on the situation, the film pulls back. Nobbs is the focus of the film, obviously, but it comes at the expense of the entire rest of the cast.

In fact, of all the characters in this film, Nobbs is the only one who doesn't appear to have an iota of happiness. Everyone else carries on with their lives and enjoys what they have. Page has a job and a wife; Helen and Joe seem happy enough for now; even the resident doctor (Brendan Gleeson) gets to enjoy the company of a maid and a few drinks here and there. Nobbs, on the other hand, dreams of having what they have. That's the real tragedy of this film, I suppose. Albert Nobbs features a whole cast of characters who are happy making do with their lot in life, and yet its central character is so thoroughly repressed that we're never completely sure if Nobbs truly wants what she thinks she wants.