Man on a Ledge

EXPECTATIONS: The concept of making an entire film out of Sam Worthington standing on the ledge of a building is a baffling one to me. I mean, Sam Worthington is basically as interesting as a brick wall anyway, and I pretty much figure ledges and brick walls go hand-in-flying buttress. (That is the only architectural term I know. I don't even think I used it correctly.) All kidding aside, Worthington has impressed me just enough in the past that I'm hoping this film will allow me to graduate him from "not very good" to "incredibly bland." Of course, that's a tall order for a film that's already got its hands full convincing me I should take Elizabeth Banks seriously.

REALITY: A few weeks ago, when we were all filling out our top ten lists for the year, Quentin Tarantino came out with one that we would all say was terrible if it was posted by anyone but Quentin Tarantino. But the most interesting part of this list is the "Nice Try" award he gives to a handful of films, including Drive. Now, I won't pretend to know how Tarantino's mind works, but it seems pretty clear he's saying "Look, I see what you were going for there, and you didn't really do it, but it was a good attempt." I'm going to steal a page out of Quentin's book here and go ahead and give Man on a Ledge a big old "Nice Try" award. And because pretty much everyone who doesn't select Academy Award nominees agreed that Drive did what it set out to do pretty damn well, giving it to this movie makes me seem like much less of a dick than he does.

Sam Worthington plays the titular man on the titular ledge, ex-cop turned escaped convict Nick Cassidy, who has been serving time for allegedly stealing a $40 million diamond from an evil real estate developer (Ed Harris). Nick goes out on the ledge in a fake suicide threat in order to create a distraction so that his slacker brother Joey (Jamie Bell) and his objectified girlfriend Angie (Genesis Rodriguez) can break into the offices across the street and steal the diamond, which proves that Nick never... stole a diamond. If this sounds like the dumbest plan you've ever heard, that's because you're only halfway through the paragraph. As part of Nick's charade, he brings in hungover and recently humiliated police psychologist Lydia Mercer (Elizabeth Banks), much to the dismay of Detective Background Character (Ed Burns, what are you doing here?). Also, because we want to show how classless and evil the media is, Kyra Sedgwick plays a reporter in a role that's completely pointless, even by Kyra Sedgwick standards. 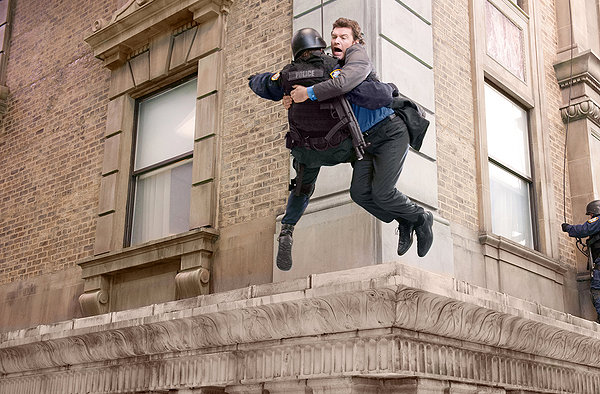 Remember than scene from Lethal Weapon?

Nothing in this film makes any sense, really. The plan that Nick and Joey have put together is ridiculously convoluted and is completely dependent on absolutely everything going right. Which it doesn't, until the very end when the plot needs it to. This is made all the more ridiculous by the fact that the film goes out of its way to show how incompetent Joey and Angie are at robbery. When these two are on screen, it's a straight-up comedy, and it would be a good one if any two people in this film were capable of appearing as though they've ever interacted with another human being in their life. But here's where it gets really dumb. The Cassidys are stealing the diamond because supposedly when Nick stole it, he cut it into thousands of pieces and sold it. Wait, what? How did anyone believe that in the first place?

If there's one thing that Nicolas Cage taught me in the movie Trespass, it's that you should never see the movie Trespass. But if there's one other thing he taught me, it's that stolen diamonds are ridiculously hard to cut, and even harder to sell. In order to do what this movie claims everyone thinks he's done, Nick Cassidy would have to be some sort of master criminal, and he's not even a very good cop. He's just some dude, which also begs the question of how he and his brother know how to do any of the things they need to do in order to steal the diamond for realsies. The entire film hinges on an insanely complicated plan being executed by three people who have no reason to be able to do it.

When I reviewed Worthington in The Debt, I joked that he was actually a great actor by virtue of the fact that he's been convincing us all that he's a terrible one. The problem is that I'd really like to say here that I was wrong, he really is just a terrible actor, but that may just be further evidence that I was right to begin with. In any case, this idea of Worthington being a good actor playing a bad actor actually somehow parlays itself into his character. Some of the more ridiculous scenes in the movie involve Nick trying to talk to Joey over the radio while not showing Lydia that he's talking to someone. This involves saying insanely cryptic things and trying not to blatantly hold his hand up to his ear. I'd hope that any other police detective, or any human being, would immediately pick up that something weird was going on, but Elizabeth Banks seems too preoccupied with trying to remember how to do a New York accent. By the way, minus the accent, Banks is fairly enjoyable in this film, but her performance is severely weakened by the fact that she's trying to play a "strong female character" who was specifically brought in because she really sucks at her job. 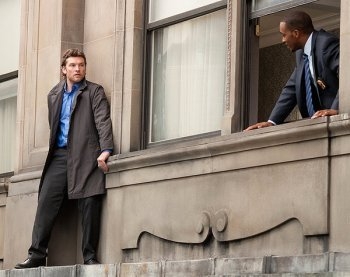 Hey, how's it going? Out on a ledge, huh? Well, see ya later.Looking at this film, it's clear what it's trying to do. It's trying to be two hours of that scene in the storm drain from The Fugitive. It's also trying to offer some sidelined social commentary that really isn't any deeper than "Rich people bad, poor people good." Look, every movie made in the past three years, I know the economy is bad. I hear the words "In This Economy" roughly any time I see a commercial, including ones for Lexus, which just seems tacky. You can't just say "The Economy" and have it pass for a message. Every film recently has had some sort of financial subtext. Off the top of my head, I can think of Take Shelter, In Time, and even Harold and Freaking Kumar. If you're gonna do it, do it better. This is just lazy. If you're going to bring in a character to represent what the media does to a crime scene, then do something interesting with her, because another Edward Burns movie already did it much better.

And this is where I bring in the "Nice Try" award. Man on a Ledge mostly covers ground that we're tired of treading, and really it just feels like it's trying far too hard. It's a small-budget film from a rookie director who seems like he wants to keep the bar very low for himself. If we gave out positive scores based on effort, I would... still probably not rate this very high. These are professional actors, albeit not very good ones, in an actual movie. This is not a student film. I expect more from a production like this. Hell, at the very least I expect Sam Worthington to keep his Australian accent under wraps. The entire film seems like a waste of a good premise, and so I'll add an addendum to the award I bestow upon this movie: "Nice Try 2: Try Harder."

MINORITY REPORT: I remember when I had to be talked down from a ledge. Rather than protesting my innocence, I was merely reeling from having seen some young men fall from there earlier in an incident that was unrelated to my presence, in spite of what the authorities claimed to have witnessed and recorded. - Montague "Legally Sane" Smythe