One For the Money

EXPECTATIONS: Considering I'd donate my left testicle to the charity of Seth Rogen's choice if only he'd maul Katherine Heigl to the ground and eat the flesh from her face, I'm a little biased against One for the Money. I know little about Janet Evanovich's novels except that I've read jacket synopses and avoided them because they sound too cute by half: A lingerie saleswoman-cum-bounty hunter with a name like Stephanie Plum? Give me a fucking break.

REALITY: I hate to beat a dead horse, but if Heigl protests the way Hollywood films depict women, why does she work so hard to continue degrading them? In One for the Money, as she has in all of her mainstream movies since Knocked Up, she plays a character (in this case a budding "bond recovery agent") who gets by mostly on her wits, but still gets a lot of mileage out of her looks and low-cut tops. After a contrived situation that leaves her naked and handcuffed to a curtain rod (don't ask), she merely has to tell her alpha-male bounty hunter buddy she's naked and -- wouldn't you know it? -- he's there in a jiff. Heigl could chalk this degradation up as the earnings ritual for women in Hollywood, except this time around, she produced the film and she has no one to blame but herself. 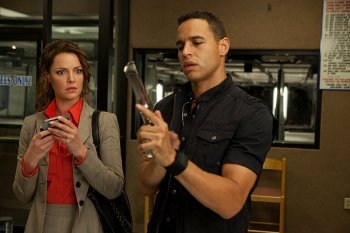 No subtext here.Let's back up for a second, though. Among the trailers attached to One for the Money are two of particular concern, because trailers are chosen based on the main feature's demographic, and the audience's reactions to trailers are a good indication of whether I should've brought a Something Awful-brand hand grenade to the theater and aimed to take out at least twenty of the no-good chucklefucks behind me.

First, we had a trailer for W.E. (appropriately stylized W/E), which -- I shit you not -- is a film co-written and directed by Madonna that feels eerily plagiaristic as it fills in the first act of The King's Speech, focusing not on the stuttering King George VI but on the love affair shared by King Edward VIII and Wallis Simpson. Even more disturbing is that, less than a year after Colin Firth's Oscar win for stuttering in a convincing manner, Madonna has the balls to show a lesser actor stuttering in a less convincing manner ... in the trailer. And -- again, I shit you not -- the audience was eating it up. The elderly couple sitting next to me were transfixed, glassy-eyed and unjustly not walking toward the goddamn light, while a woman sitting behind me whispered, "Oooh, that looks good." No, it fucking doesn't, and I think I understand why you waited in line to see One for the Money before 5 p.m. on a Friday: Because you're either too stupid to hold down a fucking job or you're on a day pass from the group home.

Next up: Salmon Fishing in the Yemen. Is Lasse Hallström for real? That's a cumbersome title, and he hasn't made a good movie in at least ten years, so obviously the target audience for One for the Money is going to love the shit out of a movie that prominently features the Yemeni version of a magical Negro but fails to give him top-three billing as it attempts to string salmon-fishing and terrorism together in the same plot. Audience-meter: 10/10. 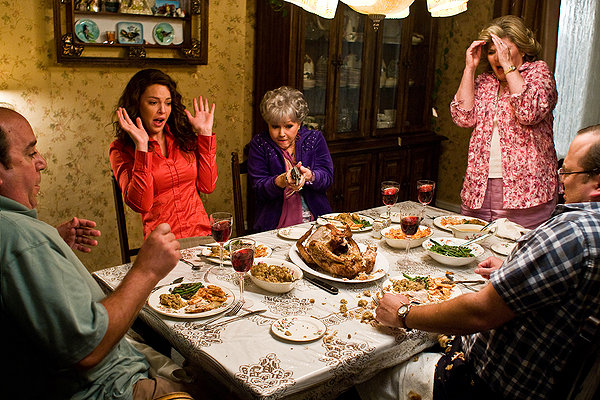 People shooting guns at each other is always hilarious.

If either of these trailers sound appealing (and if they do, you're a fucking moron who should stay off the Internet lest you accidentally have an epiphany that makes your goddamn head explode), you might -- and that's a long might, buddy -- get a kick out of One for the Money, which will treat you like a moron at every opportunity and tell you the only trait of value you possess is either jutting from your chest or swinging between your thighs.

It would be one thing if One for the Money were a light and fluffy romantic thriller along the lines of last year's The Bounty Hunter -- then it would be merely mediocre -- but One for the Money is a light and fluffy romantic thriller that's secretly obsessed with all manners of human grotesquerie, generally spiteful of minorities and layered with a voice-over in which Heigl describes what is happening onscreen as it happens onscreen.

That last criticism is self-explanatory, but in Evanovich's version of New Jersey, almost everyone who's not white is either a target of ridicule, a criminal or destined to become a corpse by the final act. Stephanie Plum's bounty-hunter buddy may be black, but he's as milky as they come and still handy with a lockpick, as opposed to the other two black characters of merit, both of whom are prostitutes and one of whom is obese -- guess how little effort the costumers put into covering her stretchmarks, especially compared to the effort they put into enhancing Heigl's bosom. Fat black prostitute is funny because she's fat. Get it? Ha ha ha.

What a spiteful, spiteful movie -- one that hates its characters almost as much as it hates its audience, one that ends with Heigl coming out on top so we can all admire how cute and clever she is while every other character comes out all the worse for wear.

And the worst part is, a certain small segment of the audience LOOOVED this movie and laughed at every (non-)joke. Why? Because it's escapist entertainment and, for two hours on a Friday, they could all live vicariously through Katherine Heigl as she did Katherine Heigl things: skating scot-free through dangerous encounters with non-whites (to be fair, her character gets shot in the ass, but she doesn't seem too bothered) while blacks and Mexicans catch most of the bullets and bruises; getting revenge on a guy who played her back in high school (it's like a bizarro-world version of Young Adult in which the protagonist never gets told how fucked up she is and gets the guy after all); and making a successful career transition from Macy's reject to Dog the Bounty Hunter thanks to big ups from Ebert's Little Movie Glossary involving a talking killer and economy of characters -- I mean, did you really think John Leguizamo would get fourth billing if he weren't the villain?